The Evolution of The Martian by Andy Weir, Screenplay by Drew Goddard 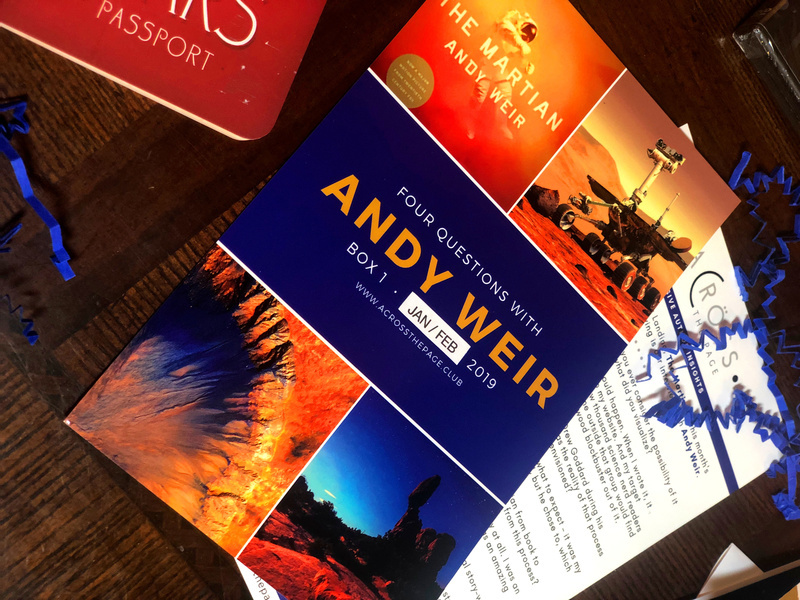 Every story has a beginning, middle, and end, right? Well, not if they evolve across and beyond the page into something else: another medium or literary dimension, if you will. And those stories are the ones we like to feature here. How they were written, then, is not as important to us as the way they broke through the walls that surrounded them to cross-over into new worlds, which in today's story is something quite literal, reaching beyond the stars to land squarely ... on Mars.

The Beginnings of The Martian


Because our passion is obviously cross-genre writing, one of the first things we asked in our exclusive 4-Question interview with Andy Weir, author of The Martian, is whether he'd ever considered the possibility of it becoming a feature film when writing the story. His answer shed some light on the humble beginnings of this story.

"No, I never had any idea that would happen. When I wrote it, it was a serialized fiction story I posted to my website. And my target audience was a small core group of a few thousand science nerd readers that followed my site. I had no idea anyone outside that group would find it interesting at all, let alone make a Hollywood blockbuster out of it."

Andy further explained the less-than-glamorous origins of the book, which literally started on a blog, no different perhaps than this one, in an interview he gave Business Insider:

"My research created interesting plot points. Like when I researched potatoes and found out how much water he'd (Watney) need in the soil. Then I realized he'd have to make water. And that let [sic] to one of the coolest plots in the book."

From there, it was the readers and the science, Andy explains, that drove the story forward.

"'Chemists actually pointed out some problems in early drafts,' Weir said during a discussion of 'The Martian' at the Humans to Mars Summit in Washington D.C. earlier this year. Thanks to the feedback, he was able to go back and correct some of the chemistry that's crucial for Watney's survival."

As the now-famous story goes, some readers asked for an e-version, which is why Weir put it on Amazon at the lowest allowable price of 99 cents, which then resulted in thousands of more downloads as an e-book than he'd ever had when he was just giving the story away for free on his blog. Then, according to the BI article, this happened:

"In just a few months it skyrocketed to the top of Amazon's best-selling science fiction list. Then a book agent got in touch with Weir. Shortly after that, the publishing company Random House called — it wanted to publish a hardcover. Four days later, Hollywood called for the movie rights, Weir said. So yes, Weir scored a book contract and a movie contract in the same week — both in the low- to mid-six figures, The Washington Post reports. 'It all happened so fast that I really had a hard time believing it,' Weir told Tech Insider. 'I actually worried it could all be some big scam.'"

It's the type of fairytale ending that writers can only dream of! But like Andy's book, it can all be explained almost scientifically: it was Weir's extensive research that pleased the thousands of readers (myself included) and still pleases new readers to this day. This was not a book written in a day or even a week. This took some serious sweat and toll, but Weir, who describes himself as "the kind of person who enjoys researching rocket technology, orbital mechanics, and physics for fun." Enjoyed the process, incorporating some of his own quirky sense of humor into the main character, Mark Watney, who summarizes his predicament at the beginning of the book with the now famous line: "I'm pretty much f*cked."

Andy, on the other hand, was just blasting off.

From Page to Screen.

Now cue in Drew Goddard, director, screenwriter and the man entrusted with adapting Weir's science-heavy story onto the silver screen. "Somehow he had to make a movie about Mars commercial–it’s considered death at the box office." Explains Anne Thompson from IndieWire, but apparently, Goddard was not afraid of taking the risk: "'If I had wanted to worry about my career I would not have done 'The Martian,' it was an E-book,'” Drew said, giving us a little insight, be it indirectly, into how Hollywood still views the self-publishing world. But Weir's book, he explains, "captured the humor of scientists, 'which comes from intelligent people screwing up a lot. Science is about screwing up. You try things you don’t know, mess up, get it right, mess it up again and do it right.'"

But according to Anne, Hollywood has a history of "dumbing things down. The studios are all too prone to underestimate the intelligence of the American moviegoing public." So Drew had a different vision for the movie. "'I don’t know how to dumb this down,” he told [Simon Kinberg at Fox]. 'The science is crucial, it’s like a religious movie. In this case his faith is science, not religion.'" And Fox not only agreed with that vision, according to IndiWire, it was Fox's own science expert, James Cameron, who pointed out the only scientific discrepancy in the story: the Mars dust storm.

I asked Andy about what he might have done differently looking back and he actually talked about that particular storm:

"If I had it to do over again, I’d change how Mark gets stranded on Mars. That storm doesn’t match real science. In reality, Mars storms just aren’t strong enough to knock over spacecraft. I knew that when I wrote it but I decided to let that one slide by. However, now I know there is lightning on Mars. I’m sure I could have stranded him as a result of a lightning strike or something like that."

I also asked about his experience working with Drew and whether he'd had any further input in the movie—something rarely seen in today's Hollywood:

"Drew was fantastic. I didn’t really know what to expect – it was my first rodeo. Drew didn’t have to consult me at all, but he chose to, which was awesome. [The] main thing is that the writer has no say at all. I was an excited onlooker on the sideline, and that’s it. But it was an amazing experience nonetheless."

When speaking about the changes Drew made to the movie during the Reddit AMA, Andy added: "It's amazing! And it follows the book very closely. They had to pull some plot elements out or it would have been 10 hours long, but they removed the right stuff in my opinion."

And sometimes that happens, when things evolve correctly and thrive—the parts that work are kept, the ones that don't are changed—and in Drew Goddard's case, it all came down to science.

"I wanted it to be threadbare, you can feel the rough edges, you can feel the cracks and the rips. Most science-fiction tends to be chrome and white, it has that clean feel. The reality is different, these things are like tin cans, it’s terrifying, you can’t believe we went up in space with these things!”

The changes Drew incorporated included duct taping the helmet, putting the accident scene at the beginning of the movie (instead of a flashback later in the book), the elongated suspense at the end of the movie, and the now iconic line: "I’m going to have to science the shit out of this."

Sometimes we want the hero to always win, but in the case of Mark Watney, it's the way he kept screwing up that endears us and draws us into his fight for survival. And though I am passionate about empowering writers to cross-over mediums and genres, admittedly, the film evolution of The Martian worked because an experienced, professional screenwriter like Drew Goddard was able to respect Andy Weir's vision while adding a few elements of his own. Sometimes, two brains do in fact work better when traveling between two worlds.

Which is not to say that Andy couldn't have eventually written a very good movie, with the right screenwriting teacher as his guide, I'm just pointing out the almost scientific observation that experienced screenwriters are pretty marvelous in their own right.

But it is our humble opinion that Drew got it right precisely because he included Andy in the process despite not being contractually obligated to do so, and that's what we want to protest, the idea that the original author and creator of these stories don't have any kind of contractual say on the evolution of their own stories onto the silver screen. And yes, as a screenwriter, I understand that some novelists and playwrights who have not studied the art of screenwriting might have an uneducated opinion as to the technicalities of a screenplay, but technicalities aside, that story and those characters—those are their babies, their brainchild, if you will, and in the very least (and I'm talking to you agents and managers) it should be standard protocol that they have some kind of final approval over that script.

However, unless there's a major shift in Hollywood, the idea of a required author-input film license may remain a dream. But who are we not, as writers, if not endless dreamers? So I'll end with the quote I wrote for this month's inspirational card: "Dare to dream beyond the stars but write with both feet firmly planted on the ground."

As always, just keep on writing across the page, stage and screen! 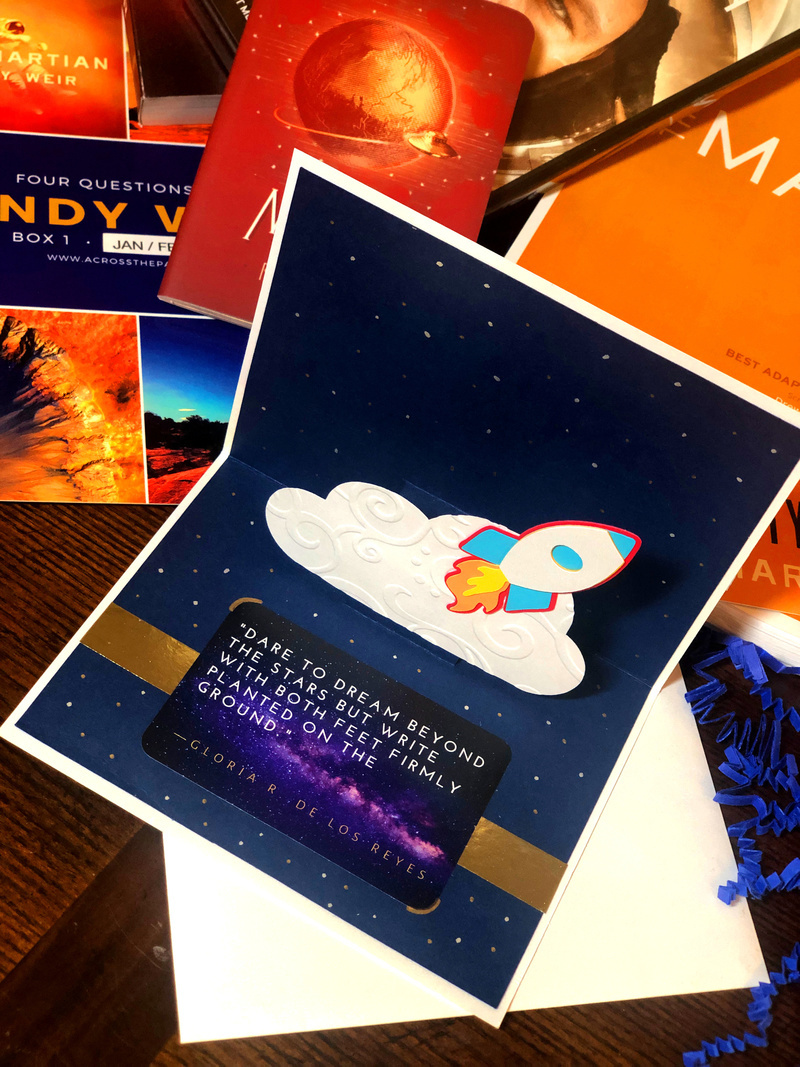 Gloiria R. de los Reyes is a journalist, screenwriter & playwright, and main showrunner for the Across The Page Club.