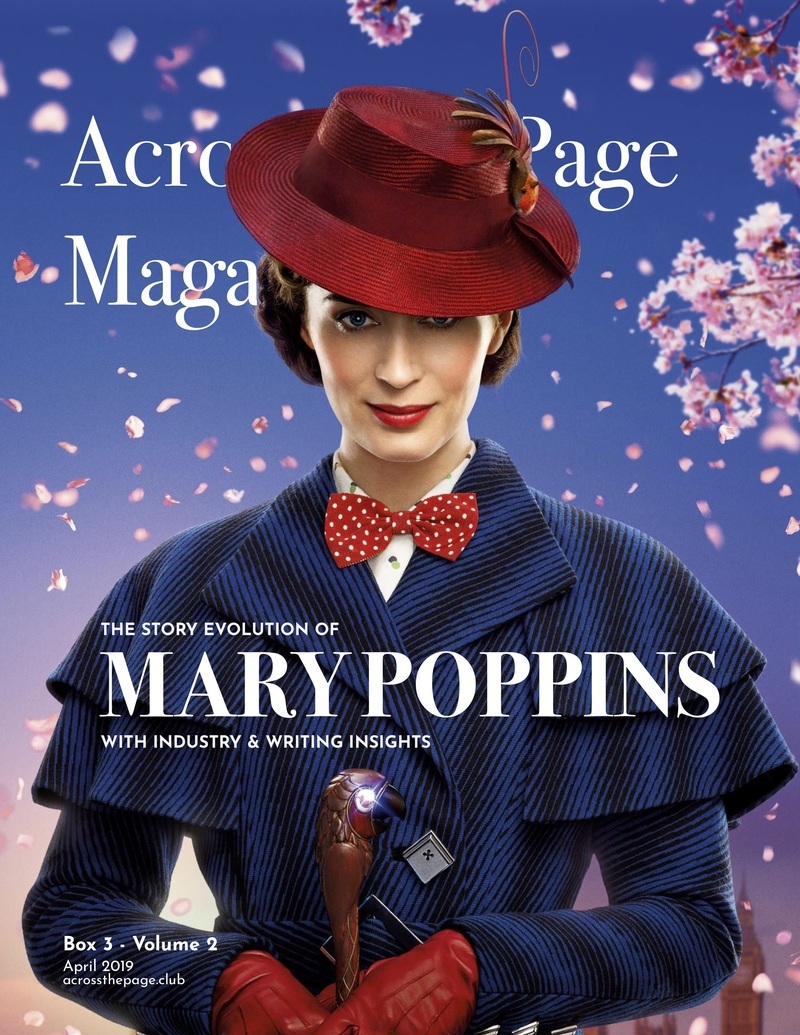 Across the (Cherry-Tree) Lane

Like an A-list actor, some stories just have the “it” factor—something about them makes them easily adaptable into just about any medium, and Mary Poppins has crossed them all off her “practically perfect” list: books, stage plays, radio programs and both television & feature films! That’s not even mentioning the ever-growing list of games and themed merchandising! That little witch (and come on, in this post-Harry-Potter world, was there ever any doubt?) has certainly done it all!

According to Wikipedia (and to summarize Mary’s humble beginnings): "Mary Poppins is a series of eight children's books written by Australian-British writer P. L. Travers and published over the period 1934 to 1988. Mary Shepard was the illustrator throughout the series.” I know that 1934 seems like eons ago, but damn, 1988? Really? In the great scheme of things, that was practically yesterday! To put it into context, Peter Pan is still going strong, with plenty of cross-evolutions and counting, and that story was partially born as one single stage play in 1904. Now, imagine having another seven books to draw from! Although to be fair, both the 1964 and 2018 movies did touch-upon a few of the other stories in the subsequent books, yet there’s plenty of material left to explore, and thus, evolve. Could Mary Poppins then, become the Peter Pan of our age? Only time will tell. However, this article does not pretend to see that far into the future, focusing only on the multiple evolutions that Mary has had up to this point. But how many were they, exactly? Well, let’s get to it then, and find out!

The Many Evolutions of Mary Poppins

According to the 2004, 40th anniversary DVD release of the 1964 film, the story goes as follows: Travers releases the first book in 1938, which quickly captured the hearts of Walt Disney’s two daughters, who made him promise he’d turn it into a film, and he did try, as early as 1938. But it was Travers herself who refused, apparently because she didn’t believe that “a film version of her books would do justice to her creation.” Can you imagine? To believe that Walt Disney could not do justice to a children’s book is, in hindsight, a sort of madness! Could it be that Travers might have been a little vain herself, very much like Mary? However, in Travers defense, I do have to add that at that point in his career, Walt was known mostly for animated films since he’d yet to produce any live-action features. The situation gives us, then, this amazing peek into a window of time where the possibility of something was somehow much grander than the actual presence or reality of it. And it is precisely that “possibility” which later materialized into yet another evolution of this story—but I’m getting ahead of myself.

So, to recap: Mary might have become an overnight celebrity, if you will, had Travers had the vision to let her evolve and grow into “something else.” Instead, she wrote another three books before Mary finally flew off the page, quite literally, through the magic of a then-emerging technology called television. Thus, the first adaptation was a 1949 CBS Telecast, as part of a story anthology called Studio One, starring Mary Wickes in the role of the other Mary. Though the script is not currently available in digital format, the Washington University in St. Louis has the hard copy of Mary Wicke’s CBS script among their University Archives. It is housed under ID WUA/04/wua00062, in Series 3 (her television career), Box 1, Folders 23-25, to be precise. In this first evolution of the story, Bert was a Match Man—a seller of matches—instead of a Chimney Sweep, which matches (if you’ll forgive the pun) more closely with his role in the original books.

Ironically, the biggest changes to the main story (and those to which Travers had by far the most objections) came from the story’s greatest hit: the 1964 Walt Disney feature film starring Julie Andrews and Dick Van Dyke, via a screenplay adapted by Bill Walsh and Don DaGradi, with music by the Sherman Brothers. When Walt finally managed to acquire the rights, the end script unified some of Travers individual shorter stories into one, singular story arc, with a new message about parenting that is not included within the original books. Some characters were deleted and Mary herself was noticeably nicer, though still quite gloriously vain. In that aspect, and in my personal opinion, Disney’s Mary was a lot more endearing, since the original tends to be, in all honesty, a bit stern with those poor children. Sure, you can perceive an underlying degree of tenderness present, but it is well hidden—perhaps in line with the parenting style of the early 1900s. Nonetheless, the film’s clever (and pioneering) use of cartoon and live-action took the world by storm and Mary will thus live on forever, despite her own creator’s very vocal protests to the matter.

But before Mary could further cross yet another literary lane, she leaped over to the other side of the world with a 1983 film adaptation in Russian, of all languages! It took another 21 years before we finally see her on the stage with a 2004 stage adaptation by Cameron Mackintosh, a London theater producer, which premiered in the UK before it finally had a run on Broadway several years later—and which is still being produced across the country, to this day. The musical includes the original songs plus a new set of music written by George Stiles and Anthony Drewe.

Then, the story leaped right onto the airwaves, like the very winds Mary loves to fly, with a 1-hour radio show adaptation that was broadcasted on May 2010 by BBC  Radio 7. If you do an online search for “BBC Radio” and “Mary Poppins” you’ll see that they have rebroadcasted and rerecorded the show several times after that. This version also comprised several of the book’s adventures into one, final script that is, unfortunately, not publicly available at this time.

In 2013, however, Travers herself took center stage when Disney released Saving Mr. Banks, which focuses on those early confrontations between Walt Disney and Travers (the subject of our featured article as well). The movie is very much in line with the romanticized retelling of J.M. Barrie’s story in Finding Neverland but gives us a glimpse into what actually sparked the Mary Poppins stories in the first place. Those interactions with Walt along with Travers memories are beautifully and magically interwoven in Kelly Marcel and Sue Smith’s screenplay (included as part of this month’s Exclusive Perks).

Which leads us to the most recent (but certainly not the last) story evolution of Mary Poppin’s magical world: Mary Poppins Returns (2018), with a screenplay by David Magee. We finally get more glimpses into Traver’s stories while remaining true to the style and feel of that original 1964 adaptation, like a final truce between Mary and the Mouse. And though we’ll never know if Travers herself would have liked this new evolution of her beloved character, if we know anything about Mary, we can probably be certain that she might have found it less than perfect, yet completely and utterly wonderful. 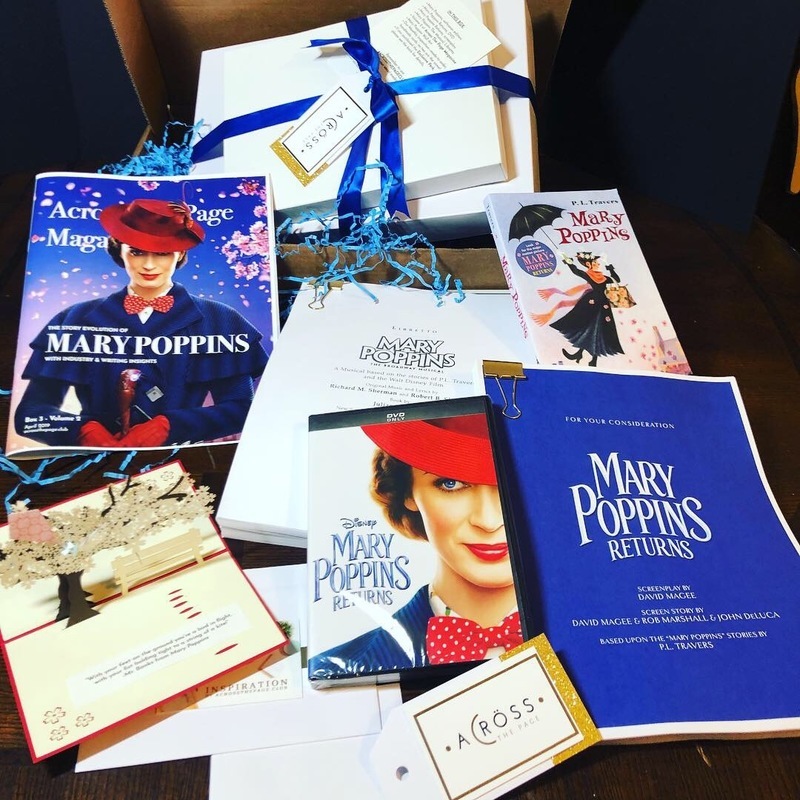